About us | Organizational structure | History of the guild

The Washington Post Newspaper Guild has been a voice for employees at the company since 1934. We represent 1,000 people across the newsroom and in our commercial operations — including award-winning journalists and the talented marketing, advertising and printing plant staff who help readers and watchers find their work.

Every two years, The Post Guild forms a bargaining committee that sits at the table with Washington Post management to negotiate a fair contract for employees. This is The Post Guild’s most critical job. In the off-season, our core leadership works with other members on a variety of committees to ensure Post employees feel empowered and that their needs are met and voices are heard.

We’re proud to work at The Washington Post, a news organization that leads the industry in with its impactful journalism. The Post Guild is working to ensure that the company also sets the example for how newsrooms should treat their journalists.

Our unit is one of 27 organized under the Washington-Baltimore News Guild. We’ve been advocating for Post staffers since our founding in 1934. We are an open-shop union, which means we represent more than 1,000 employees of The Washington Post — whether they pay dues or not. The benefit of membership, of course, is that the success of collective bargaining depends entirely on our buy-in.

First founded as a union for journalists, the WBNG now represents more than 2,600 news, information and labor-organization workers — including The Washington Post Newspaper Guild. WBNG is headquartered in Washington, D.C., across the street from our newsroom.

The NewsGuild international union — which represents 25,000 members in the United States and Canada — is one of nine sectors within the CWA.

The CWA is a labor union that represents 750,000 members across North America.

History of the Guild

Some of the most beloved journalists in Washington Post history have been unwavering guild supporters. We have made headlines, too, for byline strikes, lawsuits and walkouts. Like most institutions, our history is spotted with highs and lows. But it is nevertheless extensive and rich. Here’s a recap. 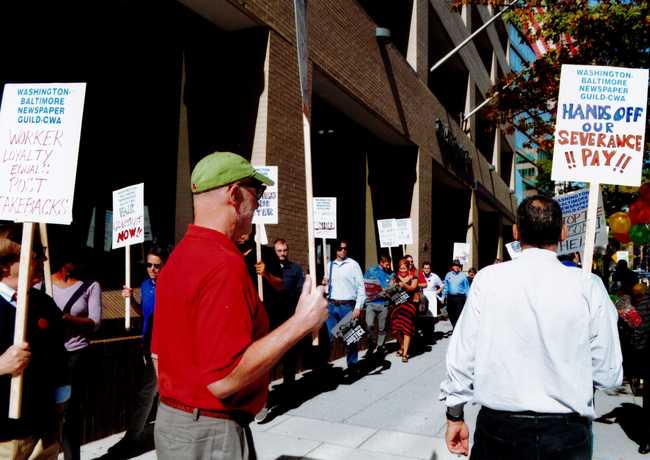